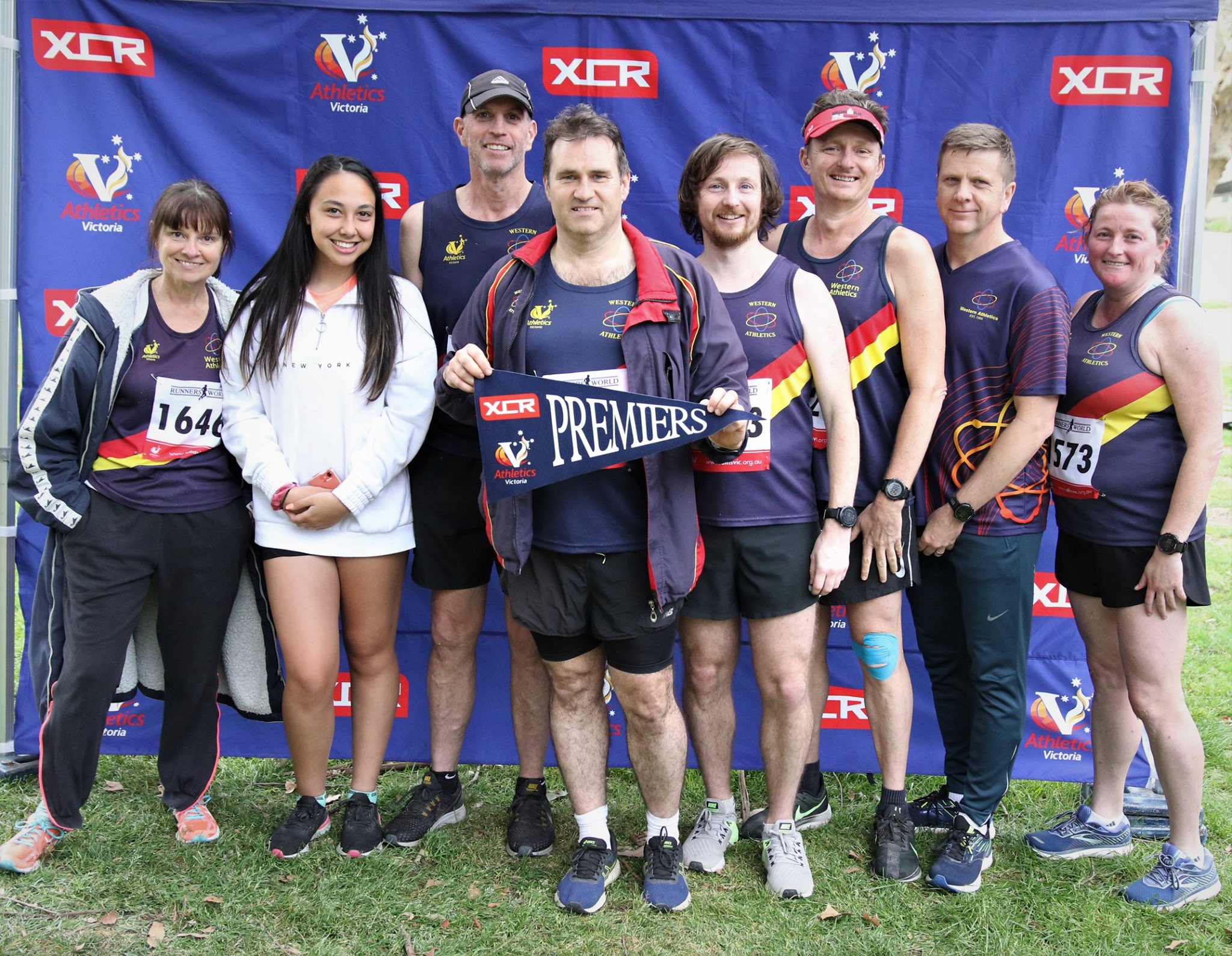 With solid numbers this round (53 athletes) we managed to field 13 teams and best results of the day were the Women’s U14 and U18 both winning their races and the men’s U18 coming third.  This round was also very significant for our men’s Div 2 and Div 7.  The Div 2 was sitting in the relegation zone all season and we managed to save it in the last race and our Div 7 followed through to guarantee the premiership.  All other teams did enough to maintain the same gradings for 2020, no relegations!

Thanks to all athletes for turning up on time and putting a great effort in this final round and across the season.  Special thanks to our three AV helpers, Peter Cashin, Mal Hodgart and Brenda Cashin.

With our Premier men and Div 5 stable in their ladder placings, our attention turned to the outside possibility to save the Div 2 from relegation and doing enough to maintain the win in the Div 7.  The premier men were a little underdone this round with the loss of new recruit Lachie Barber and Nathan Pearce, but finished a very respectable 5th place.  Led out by Cody Shanahan who was our fastest Tan time for the day in 10 minutes and 58 seconds, then Liam Cashin, Daniel Dunstone, Callum Drake, Ethan McMinimee and Kirk Shanahan, who stepped up for his first run in Premier div and produced a very fine performance with a huge PB in a time of 12.09.  The Div 2 team had 7 points to make up on Old Xavs in order to save the team and we were lucky to be able to increase our open men’s depth with the addition of two U20s; Robert Weitsz and Jackson Glover, having wrapped up their premiership in round 9.  Matt Tonge gave us the start we needed with 11.51 then all athletes chipped in with their best efforts, including Alistair McDonald’s new Western Aths 40+ Tan record, in a time of 12.51.  The result was 5th place with Old Xavs seriously underdone and coming last, giving us an 8 points lead on the day and saving the team from relegation.  Our Div 5 team was 7th and will possibly move into 4th place.  The other highlight for our open men was the Div 7 team.  Going in the final round we had a 10 point lead over Vic Masters, and whilst there were many teams, we beat them and maintained our lead and premiership.

We struggled again for numbers in our open women’s however with the support of juniors we manage to field two teams; Premier and Div 3.  Our premier women’s team, led our by Nardine Bainbridge, fought valiantly has they have all year.  U20 Sophie McMinimee took the second leg handing over to U18 Georgia Muller in her premier team debut, then Claire Hodgart steadied the team with Brigitte Sneyders finishing off in a PB.  A great seasonal effort from all those who supported this team resulting in a 6th place in the final ladders.  The Div 3 was led out by U16 Talia Roshier with Janice Hodgart continuing her breakthrough season with another PB, then U18 Natalie Christie and finishing off with Hayley Burke.  The team finished 9th and will probably slip one place down from 5th to 6th but well away from relegation.

For our junior women’s U14 and U18 teams, the Tan Relays was another display of dominance with wins for both teams.  In the U18s it was Ebony Dodemaide leading the team with a 1 minute PB finishing in 13.22 which was the fastest U18 time of the day and the second fastest time for the club, behind Courtney Scott’s 2010 record, 13.19.  Mia White and Janae Mackrell completed the team who both also ran PBs.  Another great results and 7 wins for the season.  In the U14 Liz Hall led the team, then Emily Mifsud with Ella Vrhovac finishing off with the second fastest time of the day in the age group to win by over a minute.  It was a great seasonal effort from all the girls with the team winning 6 out of 8 rounds. 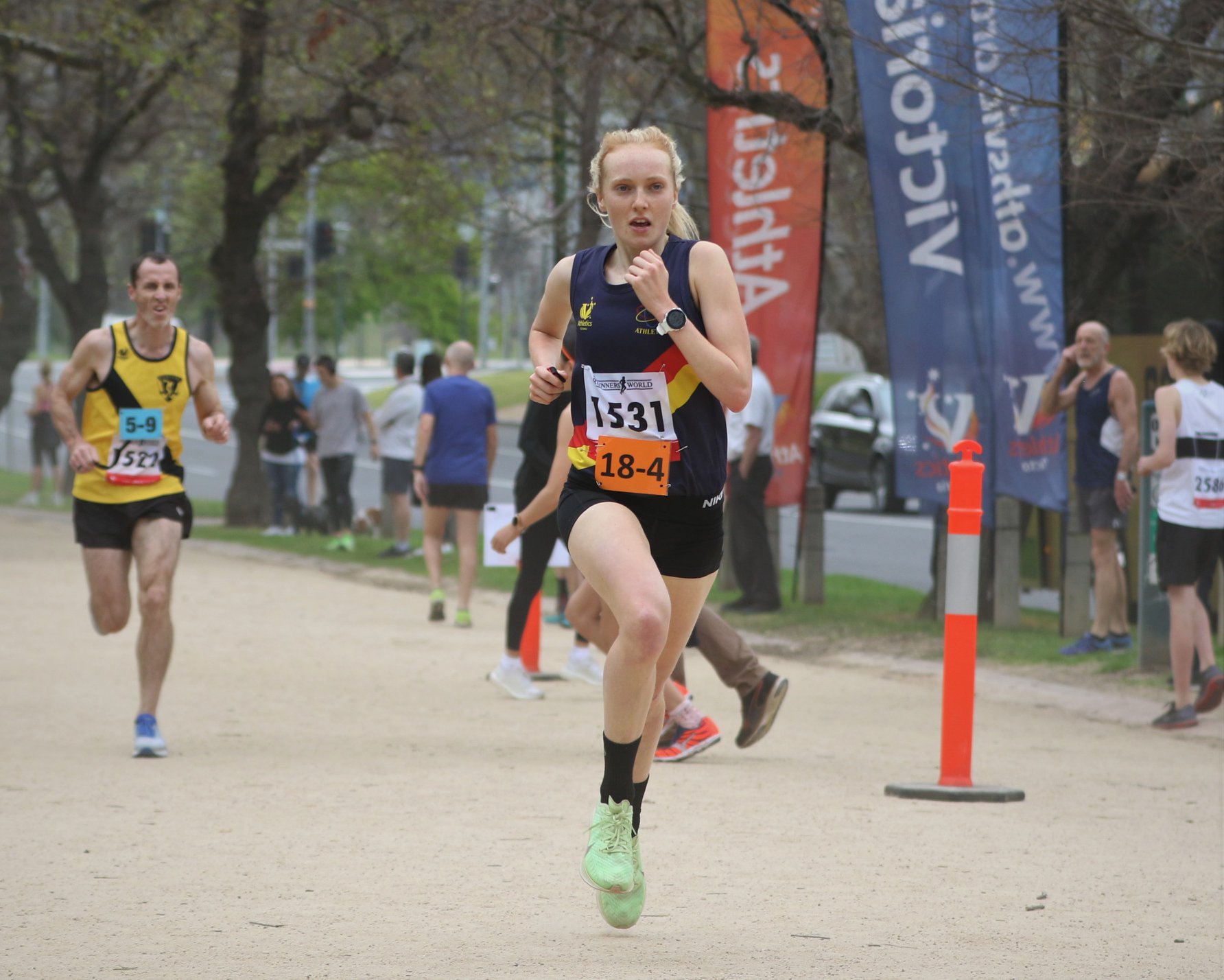 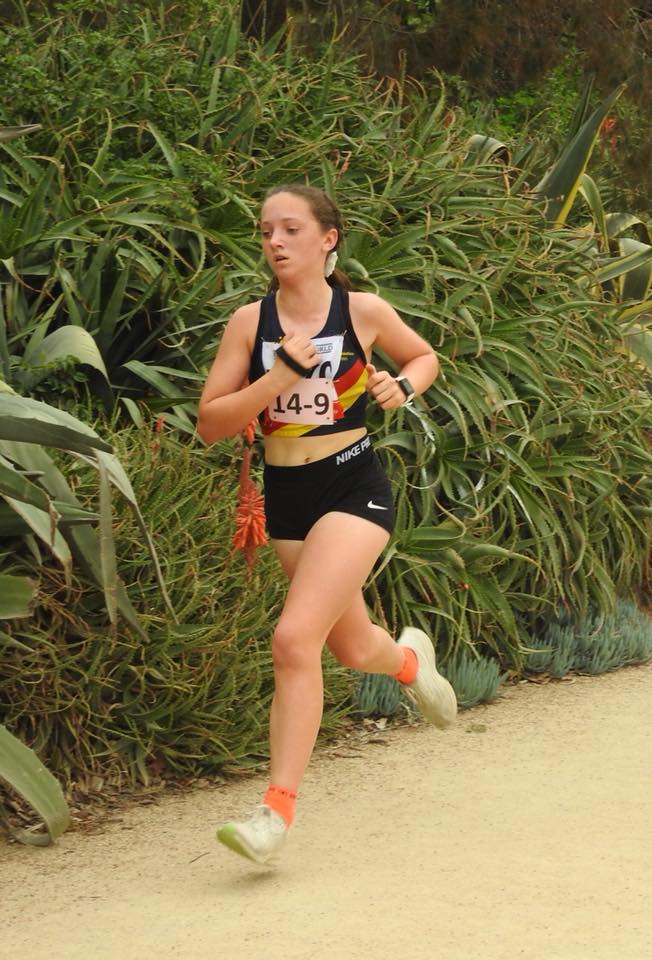 With the U20s premiership wrapped up the boys slotted into our Div 2 team with great effect to save the team from relegation.  Our men’s U18 was without its fastest athlete but with the emphatic return to racing of  Liam Morgan and in his first Tan Relay, produced a time of 12.40.  Backed up by great runs and huge PBs from Tom Glover and U16 Brad Ganley, the boys came in third and retained the second place in the ladders.  Our U16s also had a team and performed well with Harry Sharma leading, Anthony Mosele continuing his great season with a 1.5 minute PB and Couper Spies finishing off with the team in 11th place.  The U14s also fielded a team and Mitchell Roshier led the team with a 30 second PB handing over to Kaelen Macaulay then Matthew Musara in their first Tan Relays delivering a solid result in 4th place. 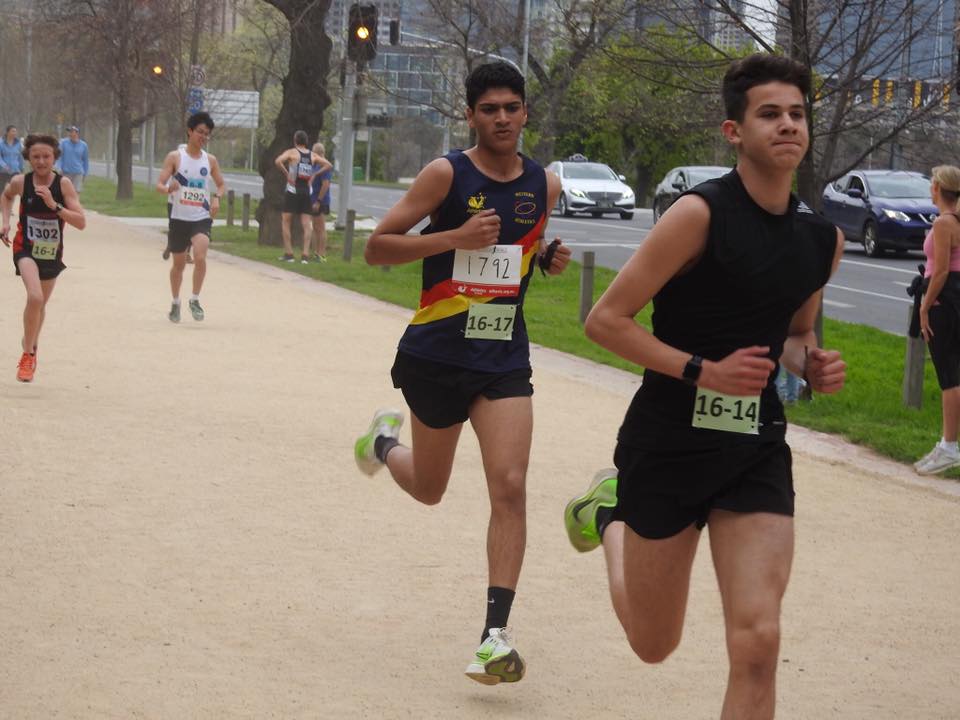 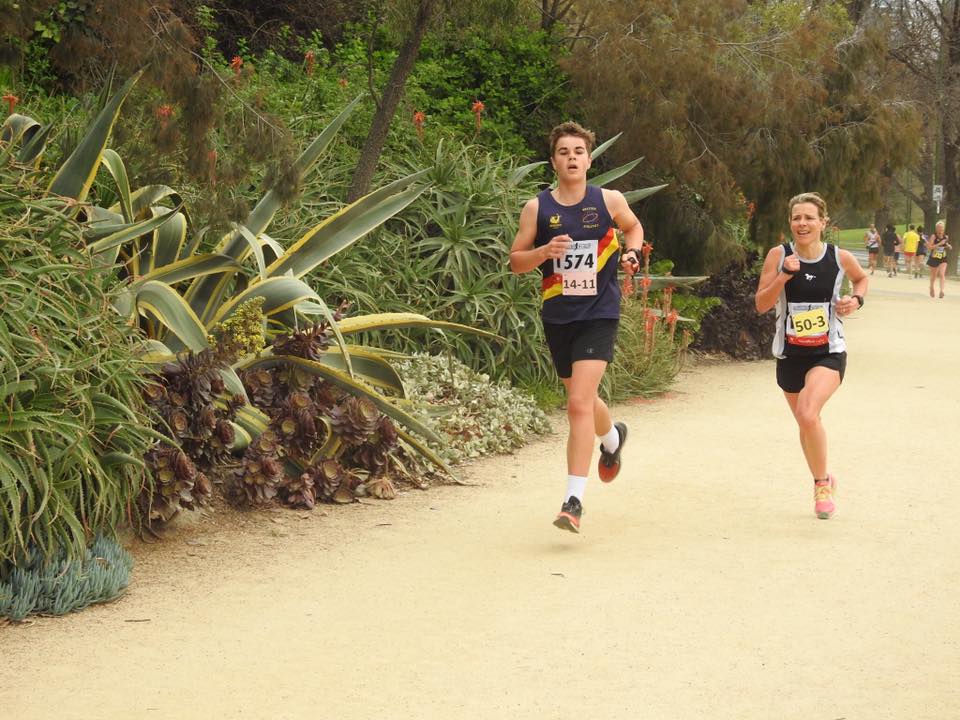 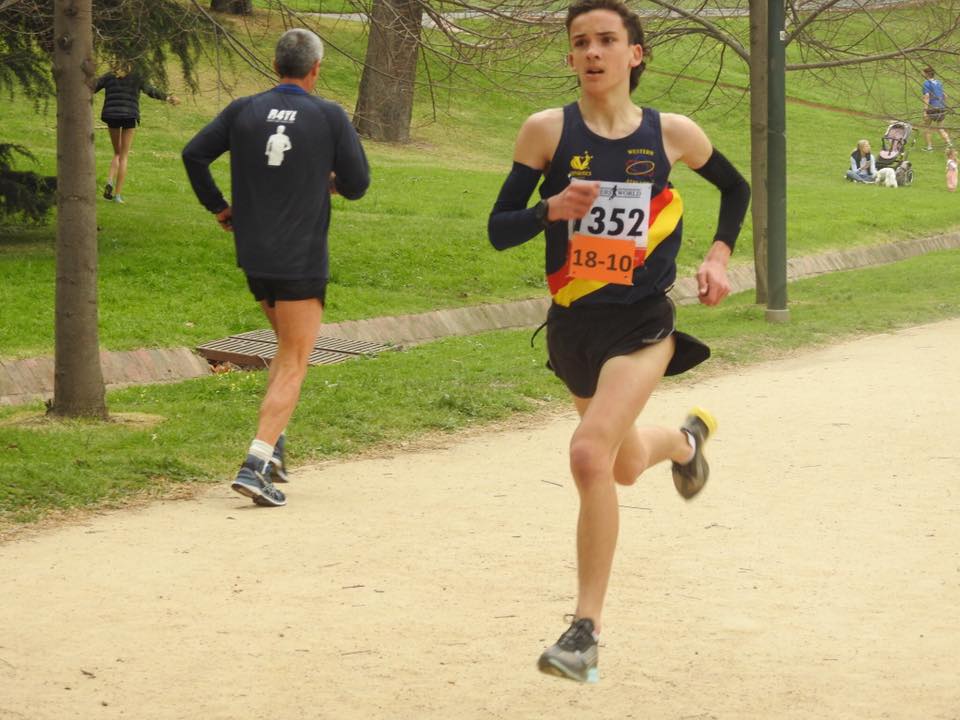 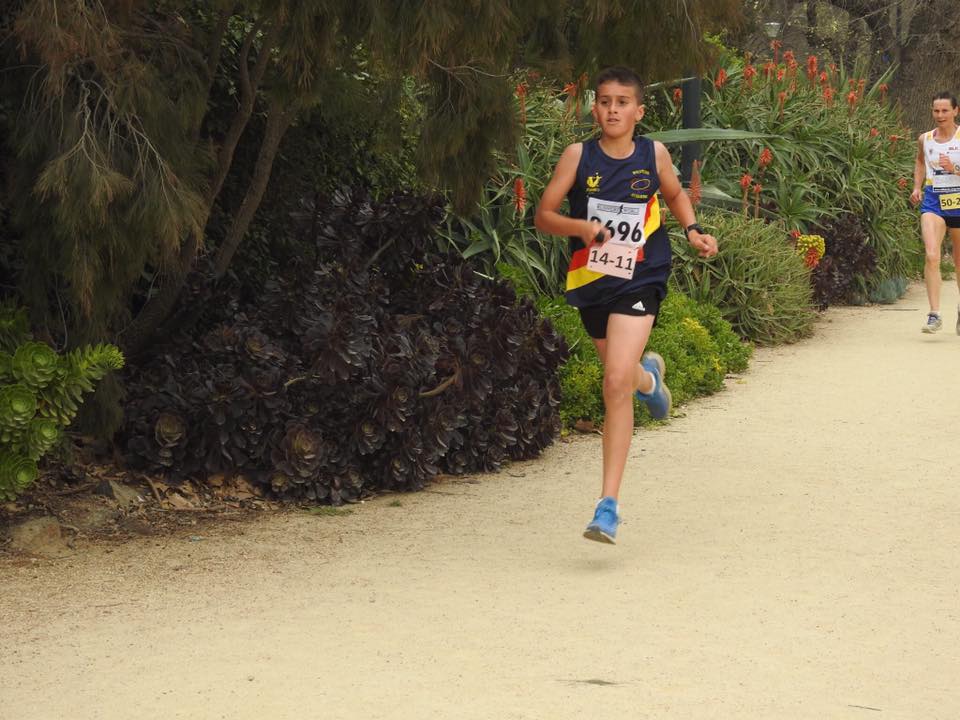